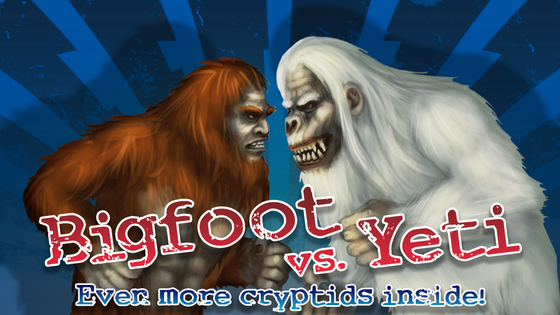 A battle is brewing between the undisputed king of the cryptids Bigfoot and his stone cold cousin the Yeti, who is sick of being left out in the cold playing second fiddle. In Bigfoot vs. Yeti you are an up and coming cryptozoologist mounting expeditions in the hopes of proving the existence of unknown creatures such as Bigfoot, Yeti, The Loch Ness Monster, the Jersey Devil or Chupacabra. Somehow you have landed smack dab in the middle of a feud between Bigfoot and Yeti so its time to choose your side as it will help shape the fate of your research and ultimately your success!

Latest Updates from Our Project:

Bigfoot vs. Yeti is chugging along and we have crossed the 50% funded mark! Thank you all again for the continued support and a special thank you to all of you that have kindly taken the time to spread the word about the game. It is extremely helpful sharing the campaign with others you know who might enjoy Bigfoot vs. Yeti.

I just got back from Metatopia where several upcoming games and expansions were tested including Born to Serve, The Wizard Mode expansion for Pinball Showdown and some secret new future promos for Bigfoot vs. Yeti. These all went over incredibly well.

In other news the Our Turn Podcast that features me on it which was delayed a few days is out now and can be found here. I had a really great time talking with Cathy.

Additionally, the online publication Adventures in Poor Taste featured a written interview with me by Russ Dobler. Russ has interviewed me in the past and he is a great interviewer and all around nice guy.  Read all about it here.

In my AIPT interview I mention one of the inspirations for this game is from back when I was a kid mesmerized by the Six Million Dollar Man fighting Bigfoot episode. If you have never seen it before, click the link to take a peek.

For those of you that have not been following it, the Bigfoot vs. Yeti battle raging in the comments section is now 15 to 12 with Bigfoot in the lead. Yeti has caught up more than once to only once again fall behind. Yeti is starting to smell something fishy going on and he is not too happy about it.

As always, if you have any questions please head to the comments section and if you have not already done so please weigh in on who is the king of the cryptids Bigfoot or Yeti and why.

Thank you again, you guys and gals are truly awesome! Until next time all!

As of right now Bigfoot vs. Yeti is already 40% funded and in case you missed it I've revealed the first stretch goal...Jackalopes! Should we reach this goal everyone who pledged at $19 or higher will receive a bonus set of five Jackalopes along with the set's Proof! card Jackalope Antlers. Certainly the most adorable of the "cryptids".

A couple of things of note are happening this coming week with the first being me appearing on the Our Turn! podcast. This podcast should be dropping sometime in the next 48 hours. The second is that both Nick and I will be at Metatopia in Morristown NJ this weekend . We will be running Bigfoot vs. Yeti on Friday at 11:00am mainly to give the stretch goals a final run through. We will also be running Born to Serve and testing the expansion for Pinball Showdown called Wizard Mode. Head to our Facebook page for the full schedule. If you are attending please stop by and play a game.

Last thing is that I want to remind people that there is a battle between Bigfoot and Yeti happening in the comments section. As it sits right now Bigfoot is in the lead with 12 votes and Yeti right behind at 11. There are some pretty entertaining reasons as to why one or the other is the real King of the Cryptids.

Thanks to all of you for your continued support and for your help spreading the word. You guys are truly awesome!

I almost forgot that I wanted to highlight two campaigns currently being run by friends of ours that you might want to check out.

Legendary Legion  Is a campaign for cool fantasy themed patches and pins. George also has a ton of cool previous patches to choose from including Bigfoot, Yeti and many other cryptids.

Cache Me If You Can is a fun, fast geocaching themed card game by our friend Dan who has done several games including one of our favorites Affliction: Salem 1692.

First, I'd like to start off by thanking all of you for backing Bigfoot vs. Yeti and extend a special thanks for your early support which is so very important. Bigfoot vs. Yeti was born out of our love for shows like In Search of..., Arthur C. Clarke's Mysterious World, Chariots of the Gods and many other films and television shows that explore strange creatures and phenomenon. I personally remember as a kid being astounded the first time I saw the Patterson Film. It certainly sparked my imagination and started me down the path that ultimately led to this game.

Second, a battle is raging in the comments section over who is better and who would win in a fight. Make your opinion known there. As of right now it is a tie. I will be visiting there often so if you have any questions about Bigfoot vs. Yeti, or any of our other games please ask. I've put below a couple of icons you can use to show your support for either Team Bigfoot or Team Yeti by changing your Kickstarter, Facebook or Twitter profile picture.

Third, if you don't mind sharing the link to the campaign or showing your support for Bigfoot vs. Yeti in any of the usual spots like appropriate Facebook groups, Twitter, Boardgamegeek etc. it would be very much appreciated. You, our backers, are the first and best support for this project so, thank you again. Your support will also help unlock all of the stretch goals I have lined up, all of which are super cool.